Nigeria on Tuesday recorded 276 new cases of the novel coronavirus, according to the Nigeria Centre for Disease Control.

In its breakdown of the latest results, the NCDC said Lagos reported 161 of the new cases.

Other states with new cases include Rivers with 36, Edo with 27, Kaduna with 19, Nasarawa with 10, and Oyo with six.

There were also four new cases found in Kano, three each in Delta and Ebonyi, two in Gombe and one each in Ogun, Ondo, Borno, Abia, and Bauchi. 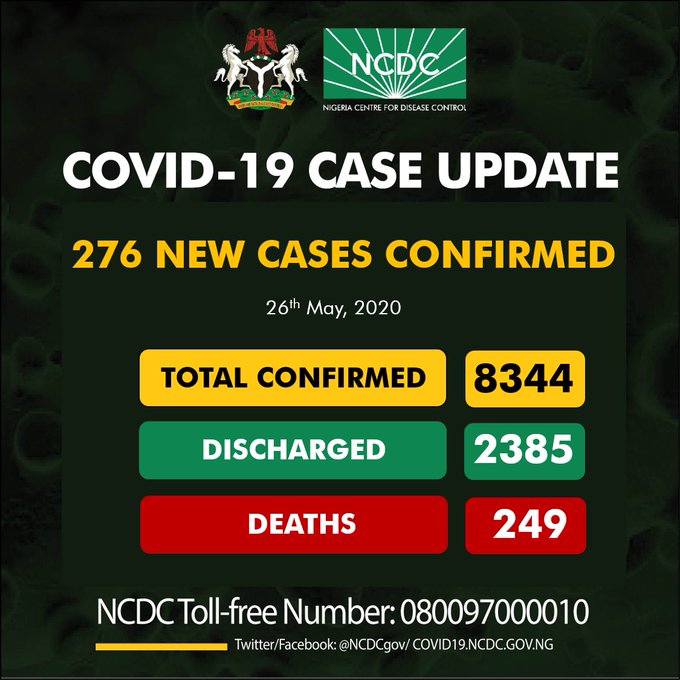 4,055 people are talking about this

The novel coronavirus has killed at least 347,723 people since the outbreak first emerged in China last December, according to a tally from official sources compiled by AFP at 1900 GMT on Tuesday.

The tallies, using data collected by AFP from national authorities and information from the World Health Organization (WHO), probably reflect only a fraction of the actual number of infections.

Many countries are testing only symptomatic cases or the most serious ones.

Spain on Monday revised down its death toll by 2,000 after it said some fatalities were counted twice or wrongly attributed to the virus.

As a result of corrections by national authorities or late publication of data, the figures updated over the past 24 hours may not correspond exactly to the previous day’s tallies.

Governor, ACF once more order to shoot bandits with AK-47